The Night That Was: Blazers Opener vs. Kings Delivers on Media Day Promise

The Portland Trail Blazers‘opening night performance against the Sacramento Kings it was joyful… then excruciating. Raise your eyebrows and then scratch your head. Ugly, then beautiful.

Portland’s many flaws and strengths were on full display: a gritty, disruptive new defense, exposed in stretches for porous perimeter coverage and shallow frontcourt depth; A talented offense, flexing its weapons and aggressiveness to the beat, but confused by laziness and stagnation; And a new injection of talent trying to meld with franchise star Damian Lillard, sometimes clumsily.

The oscillating quality reflected in the marker. The Blazers took a big lead in the second quarter and trailed by double digits in the third, before getting into a dogfight in the fourth quarter.

In the end, the strengths outweighed the flaws. A versatile small-ball lineup powered Portland over Sacramento 115-108. More importantly, the Blazers made good on a promise they sold at NBA Media Day on Sept. 27.

“I feel like we have a very talented, competitive, athletic, skilled group that’s going to compete every night and it’s going to be a lot of fun to watch,” general manager Joe Cronin told reporters last month. “…We will be a very entertaining and visible product.”

Say what you will about Portland’s messy win over Sacramento, but for the first time in what felt like the Blazers were “fun” again. The wire-to-wire action, with bodies flying to the ground and thunderous kicks, was definitely “entertaining.” At the very least, it was “visible”.

After last season’s 27-55 roster slump was followed by disheartening preseason outbursts last week, the competitive performance was a welcome sight, one the Blazers can build on.

“Just because we won with [defense] tonight doesn’t mean there aren’t growing pains,” Lillard said in the locker room after the game. “Every offense is different, every game is different, but tonight was definitely a step forward.”

Portland overcame adversity in one night. Lillard’s glorious no-show return to basketball was rather brazen. Playing in his first regular season game since Dec. 31, he shot 5-18 from the field and 1-8 on 3-pointers. His 20-point stat line was bolstered by 9-9 shooting from the line and 8 assists.

While the franchise star struggled, Portland’s new crop of versatile forwards were there to save the day, led by Jerami Grant, Josh Hart, Justise Winslow and tantalizing rookie Shaedon Sharpe.

“We’ve got a generational guy in Dame and he’s going to spend his nights.” Billups told the postgame presser. “But we’ve got to have other guys in there when it’s not their night and you can really go win a game. … That’s exactly what happened tonight.”

Grant and Hart were Portland’s best players Wednesday, embodying the aggressive style Billups wants to play on both ends. With active hands and pressure, they led a defense that forced 15 turnovers and 11 steals. On offense, Grant and Hart didn’t settle, picking up the pace and attacking the rim. It resulted in a different type of game than Portland’s usual half court, a perimeter-happy attack.

Of course, it’s only one game, and the 3-pointers will probably go up, and maybe the other stats will go down, but the team’s box score shows promise that some of Billups’ visions for this team can be translated into reality. . A lot of that had to do with Portland’s two new starters.

When the offense went cold, trailing by 10 in the third quarter, Hart and Grant returned to Portland. Hart forced the action as a one-man counterattack, scoring 12 points in the third on his way to 19 points, 7 rebounds and 5 assists on 8-11 shooting. Grant scored 9 in the frame, finishing with a game-high 23 points, 7 rebounds and 3 triples. More evidence of his physicality: Grant shot 10/13 from the free throw line and Hart shot 3/3, all coming from and-1.

Winslow matched the intensity of his frontcourt mates with 11 points, 8 rebounds and strong defense off the bench. He finished the game with a plus-minus of 21, 13 points higher than the next-highest Blazer. He played well enough to knock a Jusuf Nurkic (9 points, 4 turnovers) out of the final lineup.

“We had dogs out there,” Lillard said. “We were turning the ball over, we were making stops, we were physical, we were hitting the three, we were getting rebounds. We really came out and played a game with our toughness and our defense.”

Then there was the Portland Young Stallion game. Sharpe seemed worth every 30-point loss last season, setting the tone Blazers Twitter on fire. He finished with 12 points and a perfect 3/3 from downtown in his first NBA action. Anfernee Simons looked to be worth every penny of her new $100 million contract. He didn’t have a dazzling, ultra-efficient night (22/9 for 22 points), but he showed off his upper-level athleticism and refined finishing package. Both players looked comfortable. Sharpe, attacking shutouts and quarterbacks for triples during the run, looked like he belonged on the court. Simons, with an isolation bucket to close the third and 10 points in the fourth, looked poised for a star role, even on one night.

“[Simons] he showed that he had that mental fortitude to not have a perfect game,” Lillard said. “But still being able to find those moments to put what we need on the table.”

Like Simons’ performance, the Blazers’ night wasn’t perfect. The beautiful basketball that launched an 11-0 run in the first quarter and a double-digit lead in the second quarter stalled. Then the same old defensive issues reared their ugly head. De’Aaron Fox (33 points, 5-9 3PT) and Kevin Huerter (23 points, 6-9 3PT) hit 3-pointers, leading Sacramento to a 17-44 night from deep. Nurkic’s turnover issues and inconsistent finishing sent him to the bench, then the Kings feasted at the rim with little Drew Eubanks firmly taking control of the game.

But give the Blazers credit, they didn’t fold and Eubanks bolstered the interior protection in his later shifts. Slowly, Hart, Grant and company swung the pendulum back.

“We kept grinding, we kept fighting,” Hart said after the game.

In a one-possession game down the stretch, Billups opted to go small with the three veteran forwards who had stepped up all night. Each finished off the Kings with signature plays.

First it was Winslow, who forced senior Domantas Sabonis to trip the block with less than two minutes to play and Portland trailing 106-105. Then it was Grant, who slid to his feet to take over from Fox, before driving a three-pointer to the left to give Portland a 108-106 lead. Finally, on Portland’s next possession, Hart put the game on ice with a 3-pointer of his own to give the Blazers a 5-point lead with 22 seconds left.

The Kings aren’t world beaters, and it was only opening night, but this same Blazers team dropped its season opener in Sacramento last October. On Wednesday night, Portland passed its first test. The Blazers aren’t contenders yet, but at least for one game they’re fun again.

Just as they promised. 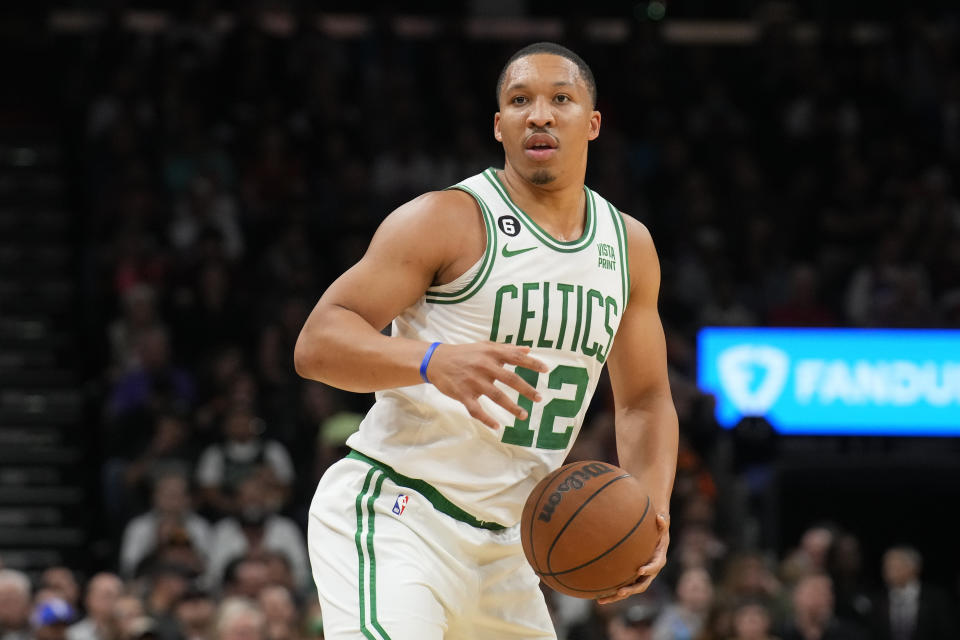