Why the Cougs lost at Utah – The Daily Evergreen

A weak O-line and tough defense led to a WSU turnover. 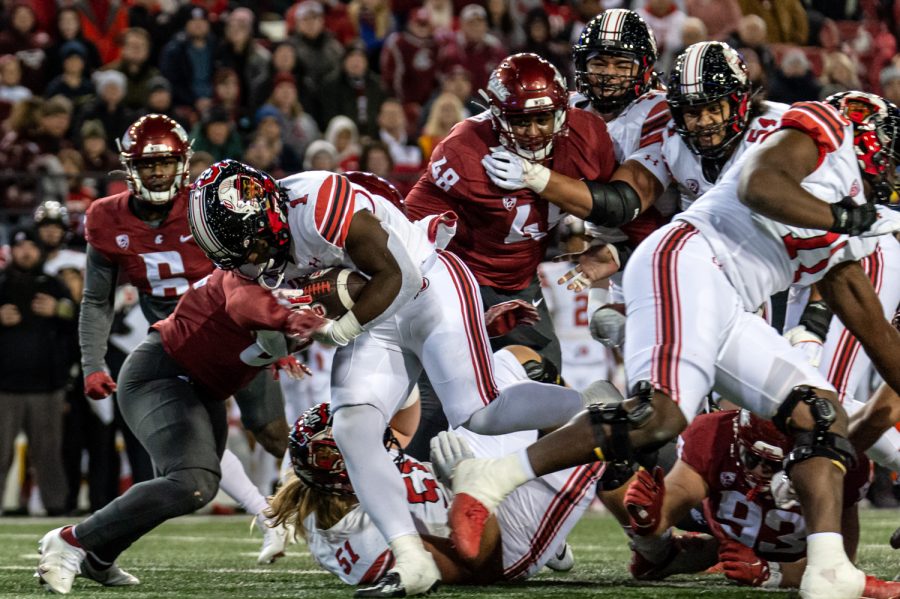 Utah running back Jaylon Glover (1) runs through the WSU defense during an NCAA football game, Oct. 27.

I like to think I know football pretty well, so here’s my honest opinion on why the Cougars lost Thursday night’s game against the University of Utah Utes.

On Thursday I had the privilege of watching the game from the press area. This was a new and different experience for me. It was my turn to stop barbarically yelling from the student section and sit down with other reporters to methodically capture the play-by-play.

For the Cougs. A nervous game against a strong opponent. For the Utes, just one more game on the road.

For starters, I will say, the match was closer than I expected. All week, my Murrow College classmates asked for score predictions. I would always answer 35-14, Utah. The score was 21-17, closer than the team gives me credit for, but there are clear reasons why we lost this game.

The lack of offensive line presence, that’s the big one here.

The Cougars simply can’t win football games if they can’t run the ball. Of course, starter Nakia Watson was down. Dylan Paine and Jaylen Jenkins carried the load, but combined for just six attempts and 23 yards. The running game was never established and had no identity.

I will say that Paine, despite being mostly on the practice squad, showed up for the Cougs. Playing the role of an offensive tackle out of the backfield, Paine definitely showed the coaches a reason to spend more time under the Martin Stadium lights. I mean he only had two rush attempts for 10 yards. But out of the backfield he saw three receptions for 29 yards.

“Offensively, we’re not doing anything well to lean on right now. There’s a lot of things we have to look in the mirror and try to figure out what we can do well, and we have to lean on that.” WSU head coach Jake Dickert said.

However, it should be mentioned that Utah lost their top two running backs Tavion Thomas and TJ Pledger. Even more important was the absence of starting quarterback Cameron Rising, due to a knee injury. The surge has been off this season, leading a rushing offense averaging 192 yards on a 64 percent completion rate.

The Utes team typically resembles a Seahawks design team. You know what I mean, good defense and a tough running game.

This year is different. They’ve built their offense around Rising, a very deep receiver team, and tight end Dalton Kincaid.

Kincaid, who usually averages 80 yards, was held to 56 yards against the Cougs. This leads me to conclude two possible theories:

First, many of Utah’s offensive schemes were designed for Kincaid, and without the regular man under center, those plays were harder to execute. Because usually, a TE is a security blanket for an inexperienced QB. A big man with hands that eats targets at close range? Yes, this is a god send for a new QB.

Second, the security blanket that is a reliable TE like Kincaid was nullified by the multiple defensive players in Armani Marsh, Jaden Hicks, Daiyan Henley and Brennan Jackson. Without the ability to find and exploit personal mismatches, Kincaid stood like a 240-pound paperweight.

Let me provide some final context here, the Utes are the reigning Pac-12 champions, this is a good football team there is no denying that. But was it a winnable game? Absolutely. If the Cougars are at their best, they can go head-to-head against ranked opponents such as the No. 15 Oregon Ducks. It’s true that the Cougars lost that game, but only because of a massive stroke of luck in the final minutes of the game .

So, in retrospect, we lost a game against a team without their most lethal offensive starters, but a good team. Utah’s defense is not to be overlooked, they stopped our offense pretty well. Or were the Cougars simply unable to produce behind a mediocre offensive line and an offense with no identity?

What I’m saying is that the Utes didn’t play their best ball either, I mean they were unable to because of their injuries. But we have the ability to beat them, it’s not impossible, and we’re also capable of beating teams of similar caliber.

Weekly kickoff: Boston college football picks up right where we left it

Five things we learned from Northwestern’s loss to Maryland