Three years later, I was back in the Stanley Cup Finals.

In our 2013 Stanley Cup run, it wasn’t so much the first round as the second that caused us trouble. We lost 3-1 to my old team, the red wings. We had made it through the regular season and won the Presidents Trophy. Expectations were high again, but you never know in the playoffs.

With us facing elimination, we had a day off between games and held a team meeting. We knew they thought they had us. We started talking about not worrying about where we were in the series. Other teams were already at home. We were in the conference semifinals. We had one more loss to go, but we still had a chance, and that was more than the other teams. We tried to look at the positives, take it day by day, see what happens and take everything we could into the next game. We tried to think of it as the pressure that was there
to close the series.

Joel (Quenneville, Blackhawks coach) put together some great lines and we started producing. We won Game 5. Michael Frolík hit a great penalty shot in Game 6 to help us even the series. We went home for game 7. We thought we had the game-winning goal from Niklas Hjalmarsson, but it was disallowed and it went to overtime. Seabs (Blackhawks defenseman Brent Seabrook) eventually scored the big goal to win it. We were definitely facing adversity and elimination and the whole team pulled it together. It was unreal to beat them coming back from 3-1 down in the series. 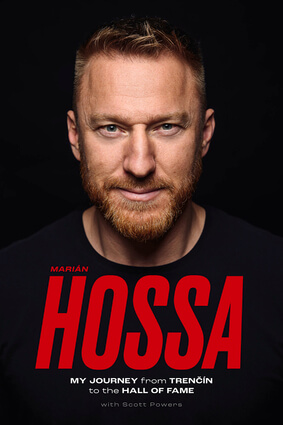 One of the worst injuries of my career came during the Stanley Cup Final later in those playoffs.

It was the second game against him Boston Bruins, and my good friend Zdeno Chára crossed me. The injury was somewhat accidental. He just gave me a small shot in the back, but it hit me in a weird way. I started to feel that something was wrong immediately. I went to sit on the bench and I could feel something shooting in my leg. I knew something was wrong. I wasn’t mad at Z because that’s obviously his style. He doesn’t care if you are his neighbor in Slovakia or some other guy; later in the book, he will explain it himself. That’s just his style.

It wasn’t even a hard cross-check. It was just weird. It was unexpected. He was skating and he crossed me. I felt no pain, but I felt something move inside my body.

I felt as if my body had shifted into a different position.

It definitely started to cause a problem.

After the game, I told our coach Jeff Thomas. I had never had any problems with my back. I was like, what the hell? I went to bed that night in Chicago after winning. We were supposed to fly to Boston the next day. In the morning, I called JT and told him I couldn’t sit. I didn’t even know how I was going to drive to the airport. He asked if he should pick me up. I said please because I had something shooting in my leg and I would have to drive sideways to get into a comfortable position. I could not believe it. I thought, why now? I’m in the Final. I got into his car from the passenger side and was sitting next to him. He’s like, is he that bad? I’m like, yeah. He could see my face and me changing.

At the airport we saw Dr. Mike Terry and told him what was going on. They decided to give me a shot because the pain was starting to increase rapidly. So we got to Boston and the three of us saw a specialist who could give me a cortisone shot in my back. Nobody knew about it. I was in real pain. In general, you should take a break for a period after the injection, at least a few days or a week. You don’t have to do anything. But the next day we had a game. I told them I wasn’t feeling well at all.

That night, I couldn’t sleep in my bed. I removed the sheets from the mattress and slept on the floor. It was getting worse and worse. I tried to put my socks on and couldn’t. I had Game 3 in front of me and I could barely move. The team had the morning skate, and I didn’t even bother to go. Before the game, they gave me an epidural injection of steroids, because I couldn’t feel the pain. It’s the playoffs, so those kinds of shots could keep you from feeling certain things and you could play the game.

And after the game, you’ll start to feel worse. The important thing was that you could play the game, and because you were so far into the playoffs, you were willing to do that. So they injected me with cortisone the day before and then the second to reduce the pain.

I thought everything would work, but there was still something wrong. I couldn’t bend down to tie my skates. I had a trainer tie my skates. I thought I had tied them too tight because after I got the second shot I couldn’t feel my leg. I was asleep. I went to the trainers’ room right before the warm-ups and I said, “This isn’t good. I can’t feel my leg. It might be tingling.”

I did want to play. We were so close to another Stanley Cup. The first Stanley Cup run I had a problem with my knee, my MCL and I put an arm on it. With some things, you’re like, okay, me. But this was different.

I tried it though. I was excited like everyone else for the warm-ups. I got behind Kaner (against the Blackhawks Patrick Kane) to jump on the ice. It was a superstition of mine. I jumped on the ice and almost fell. I felt like I was on a limb. I could feel my left leg, but it was like my right leg wasn’t mine. I have never felt this way in my life. I was skating and it felt like I was skating on one leg.

I just stood there. I told the boys what I felt, because obviously the cameras and the media were watching. They said to just be there during warmups and they would talk to the coaches about a decision. I told them, seriously, that I would be so useless for this game because I couldn’t even skate. They finally decided to take me out of the game. I went to my hotel room and watched the game while sitting on my floor.

I felt terrible because I wanted to do something to help, but I couldn’t do anything. The shot didn’t work. My whole leg was numb. How should you play with one leg?

I wasn’t worried about the long term effects of the shots. I knew a lot of players did these shots to ease the pain. You don’t take them during the regular season because you don’t want all that stuff in your body all the time. But when you’re in the playoffs and you’re close to a Stanley Cup, you’re willing to do anything for the team to win. You don’t know when you’ll get another chance. This is hockey. This is professional sport. This is part of it.

The next match, my leg was pretty much the same, maybe 10 percent better. There was still a strange feeling. I was willing to try again, because we had lost the third game and I really wanted to help the team. Joel said to me, “Look, I need you in the lineup. I want the other team to see your name in there.” I told him it felt a little better, but it would be 50 percent less than Marián Hossa. He says, “Well, 50 percent less is better than nothing.” I said, that’s fair, but don’t expect me to do much because I’m limited now and I mean it. I don’t want to be, but I am. Whatever happened to the disc in my back, it hurt my leg. Even when I was eating with the team, I couldn’t sit well in my chair.

I felt better before Game 4. I could step on my leg and feel it, but I still wasn’t myself. I didn’t feel like I wanted it, not even close. I was just getting ready for the game. I didn’t want to make a mistake and make it simple. I told the guys, I’m just going to pass the puck and probably keep my shifts as short as possible. That’s basically how I played. I felt small and desperate, but we won Game 4 in overtime.

Come game 5, I felt better and we won that too. By Game 6, I was feeling even better. I still wasn’t myself, but I felt a lot better than before. As the game progressed, I started moving again. He started to feel more comfortable. It was a great relief, not only physically but also mentally, because I had felt like I was trapped in someone else’s body. I had read what Tony Amonte had said on TV during the series, about having to sacrifice myself for the team and how I wasn’t there because I was out with an injury. The coaches were upset with him because he was a former Blackhawks player.

It also upset me because I wanted to play, but I couldn’t. I said I hope we win and I can tell him something. The poor guy had no idea what was going on so I let it go. Besides, he had better things to do after he won: celebrate.

I still felt something in my back after the series. It was probably another week and a half before I started to feel better. I got another shot in Chicago after winning the Stanley Cup and another shot in Slovakia, so I had to get a few different shots over time because it still didn’t feel perfect.

The pains were not so strong. It certainly wasn’t as bad as before, where I felt like I had glass in my body and I was touching a nerve every time I moved. Little by little it got better. I was quite worried because I had never heard anything like this. You hear about these injuries and sometimes people needing surgery. I would have had surgery if necessary, but that would be my last option.

Thank God I didn’t need surgery. He needed those extra cortisone shots though.