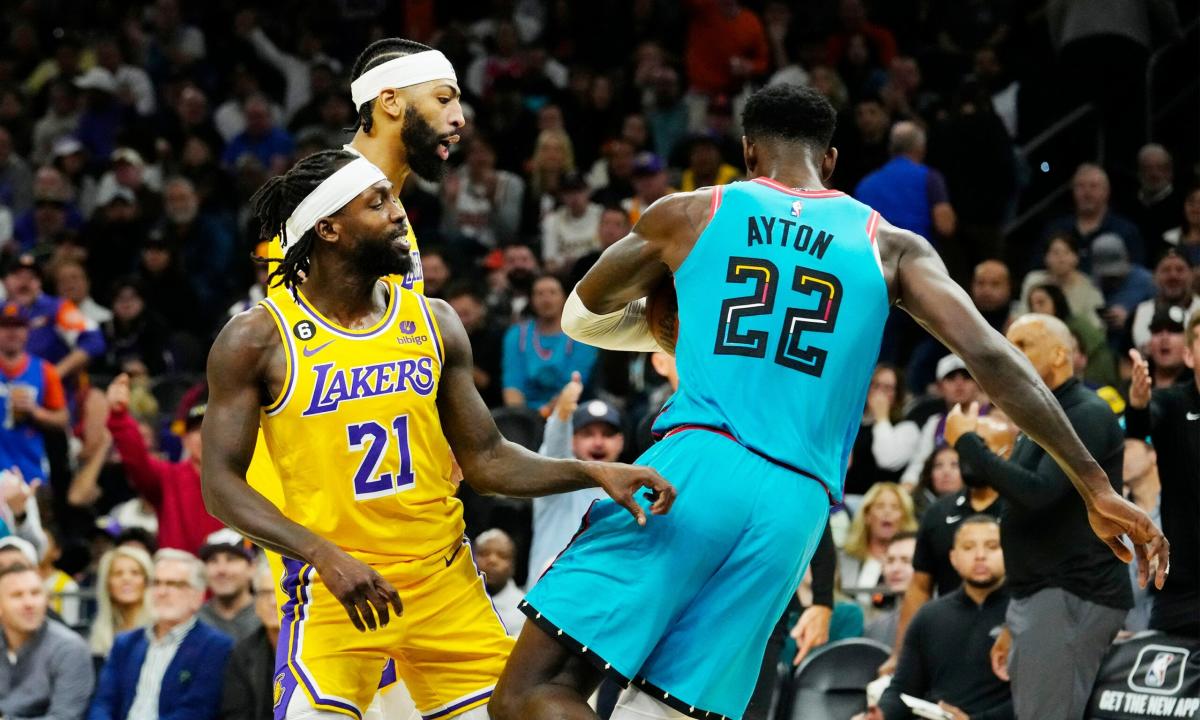 Just when it looked like the Los Angeles Lakers might have been building some momentum, that momentum ended on Tuesday against the Phoenix Suns.

The Suns won their eighth straight game against LA, including the 2021 NBA Playoffs, by outlasting Anthony Davis and company, 115-105.

Turnovers and three-pointers were the two biggest problems for the Lakers. They gave the ball away 17 times and could only hit 18.2 percent from downtown.

There were some fireworks with 3:55 left in the fourth quarter. Devin Booker blocked an Austin Reaves shot attempt, and right after that, in the same move, Booker hit the Lakers guard in the face. Deandre Ayton stepped on Reaves while Reaves was on the floor, and Patrick Beverley violently shoved the Suns center, earning himself an ejection.

However, the incident did not get the Lakers to continue. Reaves made the next two free throws, and Davis scored on the next possession to make it six, but that was as close as they would get the rest of the way.

Davis did just about everything he could to give Los Angeles a real chance to win.

He went 11-of-17 from the field and 15-of-16 from the free throw line to finish with 37 points, 21 rebounds, five steals and five blocked shots. The Suns, as was the case with the Brooklyn Nets, Detroit Pistons and San Antonio Spurs in the last three games, simply had no answer for him.

His performance on Tuesday put him in very select company.

Davis appeared to suffer an injury to his left arm or wrist during the second quarter. He was seen flexing it numerous times afterward, but it didn’t seem to affect his play on either end of the floor.

Brown missed all five of his field goal attempts and did not score. He grabbed three rebounds in about 21 minutes, but didn’t give the Lakers much on defense either.

Walker has simply been a revelation for head coach Darvin Ham and the Lakers.

The point guard had 24 points against the Suns on 8-for-18 shooting, to go along with two assists and a steal. He accomplished this not only by cutting to the basket, but also by hitting from the perimeter.

After five straight games with at least 15 points, Reaves had a quiet night, making just five shots and making three while hitting all five of his free throw attempts to score 11 points. He also contributed three rebounds, four assists and a blocked shot.

At times, Reaves had trouble guarding Booker, who was able to get to his sweet spots against him, but the Lakers guard was also able to make his usual variety of hustle plays.

Aside from his cheap shot on Ayton, Beverley helped the Lakers’ cause by grabbing 10 rebounds and dishing out two assists. Offensively, he only took two shots and missed both of them as he didn’t score.

Beverley, a career 37.5 percent three-point shooter, has been cold from that distance this season, and he absolutely needs to get back on form in that department for the Lakers to climb in the standings.

Westbrook shot just 8-for-20 from the field and 3-for-7 from the charity stripe, but helped keep LA in the contest. He finished with 21 points, three rebounds, five assists and one steal as he looked to attack the basket early and often.

He also had just one turnover, which was the fewest turnovers he’s had in a game since Oct. 23.

Nunn played just nine minutes, but during that time he contributed by making 2-for-4 shooting, scoring four points and dishing out two assists.

With Dennis Schroder back, Nunn looks to be the odd man out in Ham’s guard rotation.

It was a rough night offensively for Schroder, who missed all six of his field goal attempts and didn’t manage a single point in 20 minutes.

However, he did a relatively good job shadowing the Suns’ ball handlers defensively, and it’s a skill that will serve the Lakers moving forward.

Bryant scored eight quick points early in the second quarter to help keep LA close. Overall, he was 4-for-5 from the field, and finished with eight points, three rebounds and a blocked shot in 11 minutes.

In about seven minutes, Gabriel didn’t score a point as he missed all three of his shot attempts, but he did grab two rebounds.

Looking to shore up the defense, the Hawks open a two-game set against the Pistons

Hornets’ Terry Rozier remained in “high regard” among trade possibilities

Russell Westbrook is shooting the Lakers in the foot