Big Ten Commissioner Kevin Warren is leaving for the Chicago Bears after spending less than 30 months in Rosemont, Illinois. It’s been a short but eventful stint, from facing the pandemic just months into the job and canceling the Big Ten college football season before it resumed to adding USC and UCLA and signing a record seven-year, $8 billion media rights deal.

The Big Ten’s open job is one of the two most influential positions in all of college sports, along with SEC Commissioner Greg Sankey. The two leagues bring in significantly more money each year than their counterparts, and the gap will only widen in the coming years.

So where is the Big Ten looking? Almost the entire Council of Presidents and Chancellors has flipped since Warren was hired, which makes forecasting more difficult — and presidents tend to be an unpredictable bunch in the first place. Do they go with another underdog like Warren, who had no college athletic experience when he was hired? The Big 12, Pac-12 and even the NCAA simply outsourced their biggest jobs. The Big Ten may once again expand beyond college sports.

Or the league could go in the opposite direction, trying to avoid some of the pitfalls and friction that come with hiring someone who doesn’t have an innate feel for college sports or a pre-existing relationship with athletic directors or others on campuses.

Athletic spent the last couple of weeks discussing the opening with administrators, agents and those working at search firms to get an idea of ​​the potential candidate pool. Some are seen more as short-term solutions; others would be in it for the long haul. With the media rights deal in place, USC and UCLA opening in 2024 and the 12-team College Football Playoff starting the same year, there is no major blueprint for the next commissioner. But he or she has entered a period of great instability and uncertainty as the college sports model comes under attack from outside forces. However, the position is one of unparalleled power, authority and finance. And the next commissioner will lead the first college athletic conference that stretches from the Pacific to the Atlantic.

“Every AD in the country would take it,” said an industry source.

Jim Phillips, ACC. A commissioner transfer from one Power 5 conference to another would be almost unprecedented. But Phillips was considered by many to be the favorite to win the job in 2019 before Warren came out of nowhere to ultimately win the presidency. Can Phillips make a comeback after nearly four years? For what it’s worth, 12 of the conference’s 14 school presidents have changed since Warren was hired, including at Northwestern, where Phillips served as AD for 14 years. Could these changes in decision-making power work for or against Phillips’ candidacy? It’s hard to say.

Phillips is a Chicago native who coached men’s basketball at Illinois and spent most of his administrative career at Mother of GodNorthern Illinois and Northwest before he was hired as John Swofford’s successor in December 2021. His family still lives in the Chicago suburbs as Phillips is in the process of moving the ACC offices from Greensboro to Charlotte. He has served on more NCAA committees than one can count, but more importantly, he is respected by all of his fellow ADs in both the Big Ten and the ACC. If Big Ten ADs were in charge of this search, Phillips would be the guy, period. And there’s no mistaking that the Big Ten is far better positioned than the ACC for the future of college athletics.

But is Phillips ready for any change? He is very much a purist who believes in the collegiate model as it has always worked, to the point that sometimes his commentary on pressing issues seems a little dated. Can it be active in a changing environment where athletes can pay directly and/or share revenue?

Jennifer Heppel, Patriotic League: Heppel has served as FCS Patriot League commissioner since 2015, where she negotiated a media and marketing rights agreement while improving the conference’s visibility. She came to the Patriotic League after a second stint in the Big Ten front office; most recently, she served as Deputy Commissioner for Governance from 2010 to 2015. Heppel has served on a number of national governance committees and is one of the most visionary commissioners in the country. She was a finalist for the role the last time it aired.

Ohio State Athletic Director Gene Smith: Smith was the most powerful voice in the Big Ten this side of Warren. (Some would say even more powerful than Warren, at least in his early days as commissioner.) Does he want to accept the challenge at this point in his career? Smith is 67 years old, eight years older than Warren. He signed an agreement with The parties in 2021, which will keep him in Columbus until 2026, making it 21 years at the school. Smith would be a popular recruit and stabilizer with all the good things the Big Ten has. But the conference may want someone younger and more innovative, since most of its immediate business concerns matters that will happen in 2030 (the final year of the new TV deal) and beyond.

Stanford sporting director Bernard Muir: Muir’s predecessor at Stanford was Bob Bowlsby, who left the farm to become Big 12 commissioner just over a decade ago. Can Muir do the same, but for the Big Ten? He oversaw the most successful stretch in school history with 28 NCAA championships and 37 national titles. Stanford has won the Learfield Directors’ Cup seven times during Muir’s 11-year tenure, which is likely to impress presidents and chancellors in a conference that prides itself on supporting and achieving success in a wide variety of Olympic sports.

UCLA Athletic Director Martin Jarmond: Jarmond, 43, will add youth and energy to a conference that, despite its financial success, has never been mistaken for the cutting edge. He spent most of his career in State of Michigan and Ohio State athletic departments, so he was already intimately familiar with the Big Ten before helping his current employer enter the conference and climb out of the Pac-12’s financial abyss. Would presidents refuse to cede power to the head of a school just joining the conference? 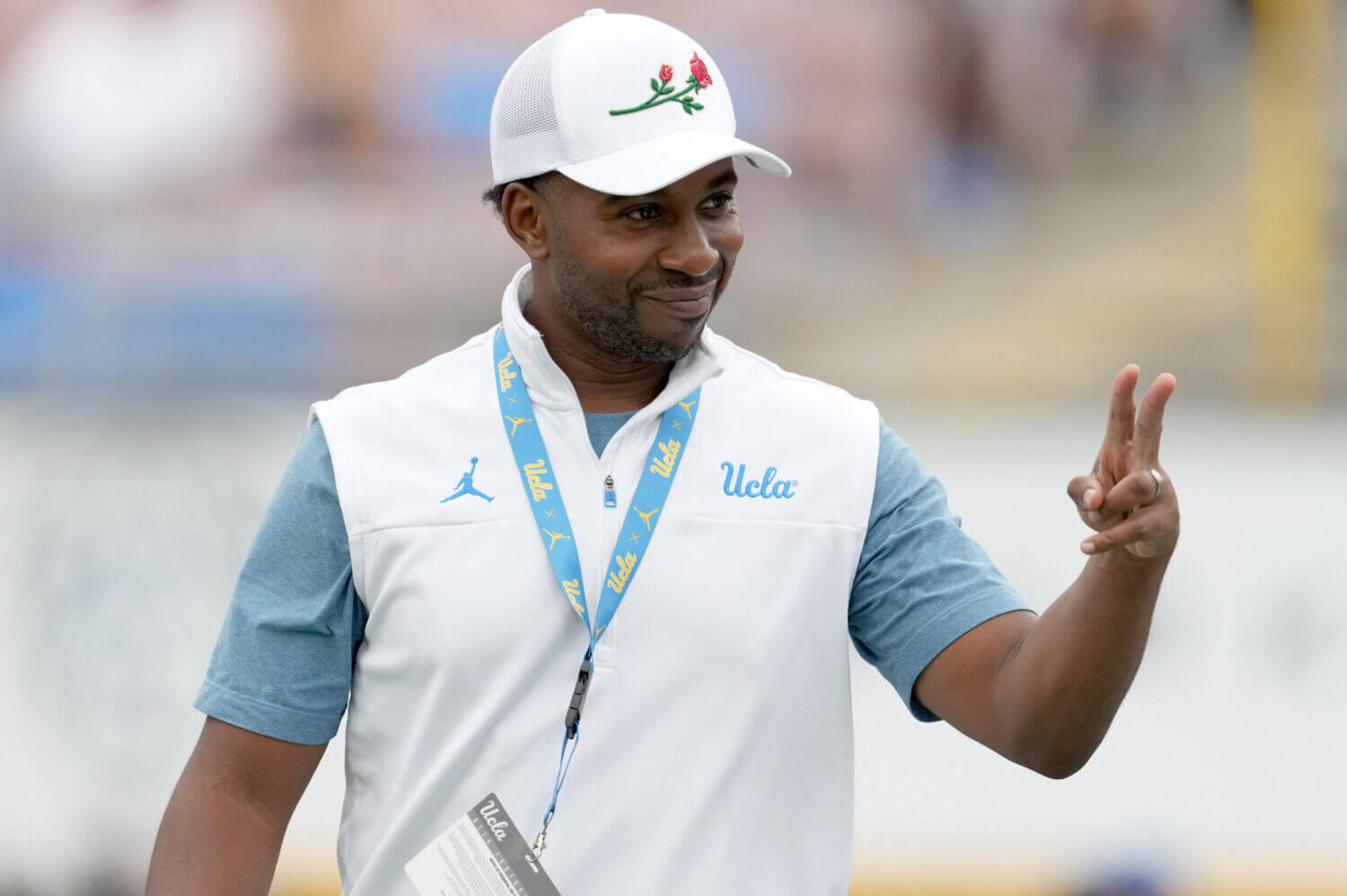 Jarmond has worked for two current members of the Big Ten and now manages the athletic department of the future member. (Kirby Lee/USA Today)

Mark Silverman, president and chief operating officer of Fox Sports: It’s no secret that Fox had a heavy hand in the Big Ten’s acquisitions of USC and UCLA last summer, as well as the conference’s massive media rights deals. In a highly unusual move, Fox essentially served as the Big Ten’s media consultant … even as its rivals made their bids. That’s a big influence. Silverman, who launched the Big Ten Network and worked at BTN before moving to Fox in 2018, has a solid understanding of the college sports landscape. He also pushed all the right buttons when Fox changed its overall college football strategy, launching a pregame show called “Big Noon Kickoff” that competed well with ESPN’s “College GameDay” and the hugely successful Big Noon Saturday night game that leaned heavily on its top brands. Big Ten. We’ve seen other Power 5 conferences hire outsiders because of the candidates’ business and media assets, and if the Big Ten chooses to go that route, Silverman might be the best option.

Ted Carter, President of the University of Nebraska: Carter has been at the helm of the University of Nebraska System since early 2020, marking perhaps the most challenging tenure in higher education history. He also understands the value of football to Big Ten schools and what to do when that football product isn’t performing at a high enough level. Carter’s military background makes him a steadfast leader, and it’s always worth remembering who ultimately makes these hiring decisions: presidents and chancellors. Might they want to raise one of their own?

Kerry Kenney, SVP of Television, Media Analytics and Emerging Platforms at Big Ten: Kenney could be a strong internal candidate for the job if Big Ten presidents and chancellors want to take a look at the office. He’s been in the league for 15 years, so he’s worked closely with both Delaney and Warren as the latter has grown in his career. His experience negotiating media rights around the league should be a big plus, even if he’s not yet 40 and a lot greener than others on this list. Kenny is a great relationship builder and rising star in the industry. Another potential internal candidate could be distinguished general counsel and general counsel Anil Galakhali, who spent 14 years in a similar role at Norman and helped move Oklahoma in the SEC before joining the Big Ten.

Kathy Engelbert, WNBA Commissioner: Another unconventional candidate, Engelbert has served as WNBA commissioner since the summer of 2019, with experience negotiating the collective bargaining agreement, managing the 2020 COVID-19 season in Wubl and announcing plans to extend the length of the WNBA season and plans to add additional teams. The WNBA’s impressive growth trajectory can be seen in the increase in television viewership, as well as increased player visibility/marketing campaigns and sports betting.

Engelbert, who worked at Deloitte for 33 years and became the first female CEO of a Big Four firm, played basketball at Lehigh University under Hall of Fame coach Moffett McGraw. The Big Ten also saw the growth potential of women’s basketball, hiring Megan Kahn as its first vice president of women’s basketball in 2021, and if leaders want to lean on someone who understands how to grow the sport, Engelbert will be an inspired choice. Big East commissioner Val Ackerman, who founded the WNBA back in 1997, could be another intriguing candidate if Big Ten presidents and chancellors want to consider those without football experience.

Tim Pernetti, President of IMG Academy: Pernetti last starred as AD at Rutgers, which he helped advance to the Big Ten from a decimated Big East in 2012. A former tight end for the Scarlet Knights, Pernetti became one of the public figures after the Rutgers men’s basketball player Mike Rice’s abuse scandal led to his resignation. in 2013. But that was nearly a decade ago, and Pernetti maintained a large enough presence in the college sports space that he ended up being one of three finalists for the Big 12 commissioner job that Brett Yormark won last summer. Prior to his position at Rutgers, Pernetti had a long and distinguished career as a television executive. Since then, he has been the company’s chief commercial officer MLS club NYCFC, president of IMG College and briefly worked at Endeavor before joining IMG Academy in Bradenton, Florida in 2020.

Chris HowardASU Executive Vice President/COO: Howard is a popular name for big searches because, simply put, his resume is second to none: he’s a former college athlete (Air Force ran away) and was president of a college (Robert Morris University). He is a Rhodes Scholar with an MBA from Harvard who was awarded a Bronze Star for service in Afghanistan. He also served on the college football playoff selection committee. Howard, like Pernetti, was an early candidate for the NCAA presidency, but he dropped out. Could this job—one with far more impact—be enough to attract him?